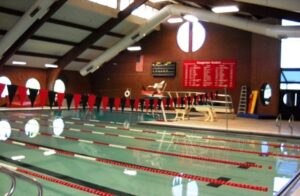 My daughter was a captain of the girl’s swim team in her junior and senior years. She was the one to greet the opposing team and captains before the meet. Her favorite story was to tell the other team that they were swimming in thirty-year-old water. It always seemed to make the other team just a little hesitant to dive into the pool for a race. If it gave us the edge, who knows? It was a great way to get into their heads. If they inquired further, she would show the that the pool was a little lopsided and that swimming back to the starting block was downhill. The water level on the west end was higher than the level on the east end. I have mentioned before about being built on Rattlesnake Hill and sliding westward. There was a story that engineers had warned us that if we drained the pool, it would collapse because of the problems. They had to work on it a few years ago and so I know first-hand that it can be drained but that is the only time I have seen it empty. Whether an engineer said this or not, I can’t prove but I do know that the story of the thirty-year water always seemed to give us a little home-field advantage.