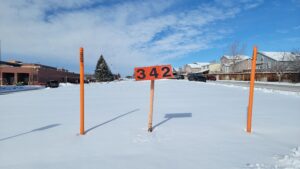 342 is an important number to Rangeview and almost everyone who passes by the sign has no idea what it means. The number changed how the building and external amenities were placed on our site. Rangeview has one of the smallest land footprints in the state for a 5A high school. We have a nearly impossible location to bat when playing baseball at sunset. The bleachers are crowded between the football and baseball field. The lower-level baseball field has seen survey crews in the outfield during a game. The number 342 disrupted our parking lot access at the beginning of this school year for several weeks. 342 is located on the Rangeview site and other numbers higher and lower run throughout the city of Aurora. 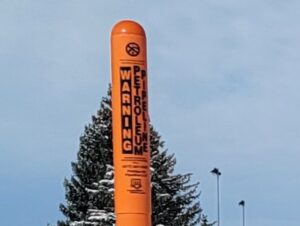 The number 342 indicates the distance from or to the destination of this petroleum pipeline. This pipeline runs completely through the city of Aurora and millions of people drive by these orange, red, and yellow poles without knowing what is under them. They also have the requirement of an easement that cannot be built on. As a result, APS moved the bleachers to the west side of the football field instead of the east side as planned. This also caused the moving and turning of the baseball field. Rather than facing straight west it was turned and causes the batter trying to play at sunset to face a ball coming right out of the sun. It has to be surveyed periodically and one time it was during a lower-level baseball game on the upper field. They would not relent and the umpire said we could play around them and I felt okay because they had hardhats. Traveling east through Aurora and there are several of these poles indicating the path of the pipeline. This last summer they had to redo the frame around the pipeline under the entrance to the south school parking lot. This caused major traffic issues but still very few people knew what they were fixing. You now have another secret of Rangeview and Aurora to share with others. 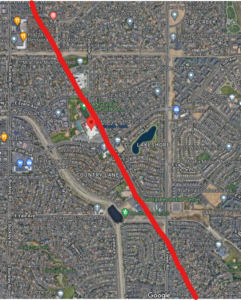