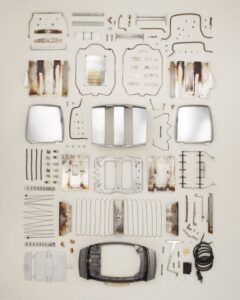 Reverse engineering is an integral skill for my students in engineering class. We spend a few weeks on this task. We learn about the elements & principles of design. We do a visual analysis of a product and then do a functional analysis. Both are designed to help students understand that many things go into the creation of a product. They are also learning about the iterative process and that there are often many attempts before a product is ready to go to customers. In class, we do a virtual coffee pot and kids can see the steps. I believe in hands-on so we do a small flashlight every year. It has about 12 parts and can be easily dismantled, measured, and drawn in a cad software program to recreate the light. I buy a box of 18 flashlights for about 15 dollars and students work with a partner. It takes several days because of the meticulous measurements.

We didn’t always do a flashlight. PLTW suggested years ago that the students bring in an old worn-out appliance from home and work on that. This is good in theory but not in practicality. I said many times and loudly that they bring something that their family is ready to give to Goodwill, a garage sale, or throw out. I looked into every student’s eye as I said it for verification. When they brought things in over the next week, I asked them about the status of these products.  Fast-forward a few days ahead. We are deep into the project. The most obvious thing in this project is that the thing will never go back together. I get a call one afternoon from a parent. They kindly asked what we were doing in class. I proudly proclaimed our activity and the importance of such a skill and mentioned the use of old discarded appliances. They then followed up with the next question, “What did my child bring in?” As the parent was asking the question my stomach started to knot up. I stammered out that they had brought in a toaster. She asked if it had yellow sides. I mumbled that it did and then I asked the next question: “It wasn’t ready to be discarded, was it?” She said that it was their regular toaster. I apologized profusely and asked if I could talk to the student before she did.

When I got the child in front of me, I grilled them about their toaster. After a few questions, they admitted that they were in a panic and it was the only thing they could think of. After some negotiating, he agreed to pay his mother back and take her to get a new toaster with his own money. I told him I was holding his points, hostage until he completed the ransom for his grade. Finally, a few days later the mother called and said that all was right with the world and she even made him buy a nice wide one she could use for bagels. Since that day we have always reverse-engineered a flashlight.