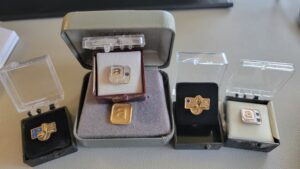 I have had good luck with serendipity during my career. The first example was how I started working in Aurora. I had an interview with Montview and with Rock Ridge in Castle Rock. Rock Ridge was the school where I student taught. A sixth grade teacher was going to the Expeditionary School in Denver and so I thought I had a good chance at the position. I also interviewed with Montview because one of my professors was a Teacher Leader for the primary team and she asked me to apply. It was for a position on the primary grades team and they had never had a man in the position so I would be breaking new ground.  Both positions interested me but the Montview job I took a little less seriously. Cheryl told me that if nothing else it would give me an opportunity to practice interviewing. I  was waiting to hear on both positions. I knew that the Rock Ridge position closed on Friday so I was expecting to hear the next week. Sunday evening I received a call from Ben Cooper who was the HR Director for Aurora. He told me they were impressed with me and that they would like to offer me the position at Montview. I don’t know if it was out of fear of not getting other offers but I jumped at the chance. I didn’t even think and said yes.

I went to my student teaching position on Monday with the great news of securing a position at Montview. I didn’t know much about Montview but what I did know was that they offered me the position. When I got to Rock Ridge the next morning, I went straight the principal, Ron Cabrera and told him the good news. He then asked me to grab a seat. If you want me to be nervous, just ask me to take a seat. With my heart racing, he told me that he was coming up to the classroom this morning to offer me the position at Rock Ridge. It would be in a more prestigious district and a bit more salary. I gave it a minute of thought and told Ron that I had accepted my position. As a man of my word I couldn’t go back to Aurora and tell them I changed my mind. I told him that he wouldn’t really want someone who was that untrustworthy and that it would always be hanging between us. I told him that if at the end of the first year I had a change of heart I could always contact him. Working in Aurora hasn’t always been perfect but I wouldn’t change a thing. Ron went on to other positions and became a leading administrator in Colorado. I last spoke to him a a few years ago when he was in St Vrain Valley Schools and told him how my career had worked out and that I appreciated his offer more now because it set the tone for the type of teacher I would become. Seizing opportunities became a theme throughout my career. Many of my greatest decisions have started with, “Would you consider …………”