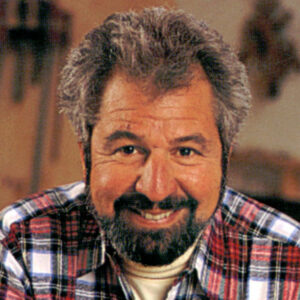 On day 33 I spoke of a poor role model. I want to now speak of a wonderful role model from the very same conference in Las Vegas. One of the speakers was Bob Villa who was on the show This Old House at the time. He was doing a talk on including trades into everyday classroom activities. At the time vocational courses were looked down upon. He gave a very compelling argument and was a strong advocate and spokesman for the trades. He was also serving as a spokesperson for Sears and their line of Craftsman tools. He told stories but also reminded us of the importance of science and math in the trades. My favorite story was of his daughter that had to build a house mock-up for a class. He said he wasn’t allowed in the basement and that he could only see it at school for a parent evening. He got to the school and said he could tell his daughter’s project right away. No matter which direction you look at it from, it was leaning left. Mark Rodie and I were very excited to meet him and for me, it was extra special because my daughter and I watched the show on PBS all the time. I asked him to sign the program flyer for my daughter and he was more than happy to oblige and she loved it. We got together with our people that came from Aurora and we told them the story. They thought it was funny but asked why I didn’t get something signed for me.

You might think that this was the end of the story. As with many of these, there is more to the story. The administrative assistant for the learning coordinator that was in charge of science also came with us on the trip. Sheila Seigert was the best! She was one of those folks who instantly enjoy being in their company. Some of the best experiences in APS have been working with her. She thought it was unfair that I didn’t get anything signed for me. She was not the type of person to let things go. She spent the rest of the day tracking him down in his hotel room. She knocked and told him the story and he was more than happy to write one out just to me. I think it is important to honor the things that people do for you. As a result, that picture has hung in my classroom or office for the last 25 years. It is still one of my prized possessions from my teaching career. I have awards and plaques but the place of honor still goes to Bob Villa.